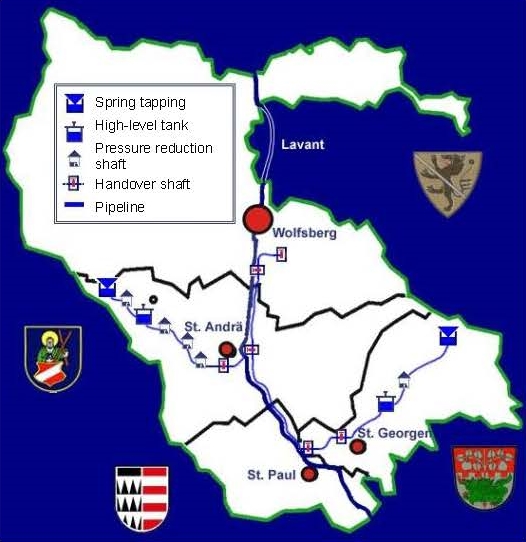 The densely populated River Lavant valley region in the eastern part of Carinthia in the southern Austrian Alps is characterised by a low level of precipitation, geological conditions unfavourable to groundwater storage and a limited number of springs that can be used for water supply. In the past decades, annual precipitation amounts have declined significantly, and the region has been affected by water shortages during hot summers several times. Despite uncertainties in projections of future changes of regional precipitation patterns, the variability of groundwater levels and discharges of springs are expected to increase further in the future, raising the risk of water scarcity and temporal bottlenecks in water supply during drought periods.

The region has responded to these challenges by adaptation measures to secure future water supply on the regional and local level, in particular by establishing a regional water association network interconnecting the supply networks of four municipalities, developing new water sources and investing in extension of the supply infrastructure. The municipalities are encouraging their citizens to use water sparingly and efficiently by providing information about water stress levels and raising awareness about water-saving measures.