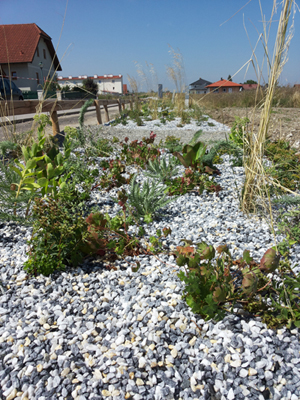 The municipality of Ober-Grafendorf is located at an elevation of 280 m in a typical pre-Alpine landscape in the Mostviertel region in the western part of the Austrian province Lower Austria. With 4,612 inhabitants on a municipal territory of 24.6 km2, Ober-Grafendorf has a population size only slightly above the statistical average of Austrian municipalities, and it is among the 98% of Austrian municipalities with less than 20.000 inhabitants. In recent years, more frequent and more intense heavy precipitation events alternating with more pronounced drought periods have caused increasing challenges for municipal development. Excess surface water runoff from sealed surface areas has repeatedly caused small-scale flooding, overloading of the sewer and wastewater treatment system, and rising costs for its maintenance. On the other hand, during hot and dry periods the cost for irrigating and maintaining the urban greenery has been rising constantly. Based on observed climatic trends and climate projections, it is anticipated that these problems will be exacerbated by future climate change. The municipality has responded by implementing a smart, ecosystem-based rainwater management system that is incorporated into an environment-friendly street design. The adaptation solution helps to reduce public costs, delivers multiple benefits and holds considerable innovation potential for sustainable and climate-sensitive local road construction.

Planning of the adaptation measure was embedded in a regional pilot adaptation process conducted within the Interreg project C3-Alps. From 2011 to 2014, the process has succeeded in setting adaptation on local agendas, building adaptive capacities and triggering adaptation actions in seven municipalities in the Mostviertel region, including Ober-Grafendorf.