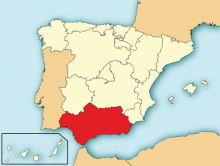 Andalusia is very vulnerable to climate change owing to its geographical location and climate. The future outlook is that the changes observed to date will worsen over the coming decades.

The analysis of regional climatic scenarios generated by the Regional Department of Agriculture, Fishing and the Environment of Junta de Andalucía, the Regional Government, shows that there will be greater increases in average maximum temperatures than in average minimum ones. In 2050, the average increase is expected to reach 1.7°C in average minimum temperatures and 2.2°C in average maximum temperatures. The areas in north-east Andalusia will be subject to the most significant temperature increases. As far as precipitations are concerned, there will be a gradual fall in levels as from halfway through the 21st century. This will affect all Andalusia (average fall of 7% in respect of the current climate) and will be particularly severe in the Valley of the Guadalquivir and the Andalusian Atlantic Basin.

For some time now, the Andalusian government has been aware of the importance of climate change for its territory and, as a result, took the initiative early by passing the Andalusian Climate Change Strategy in September 2002.

As might be expected, water resources, energy and use of the territory will play a leading role. This is acknowledged in the Adaptation Programme, which pays particular attention to critical socio-economic sectors, such as farming, tourism and health, and highlights the importance of protecting and improving Andalusia's forests. Another basic pillar for action is the generation of scientific knowledge and its application, taking advantage of the functionality of protected spaces as natural laboratories for evaluating and monitoring actions for adaptation to climate change in Andalusia.